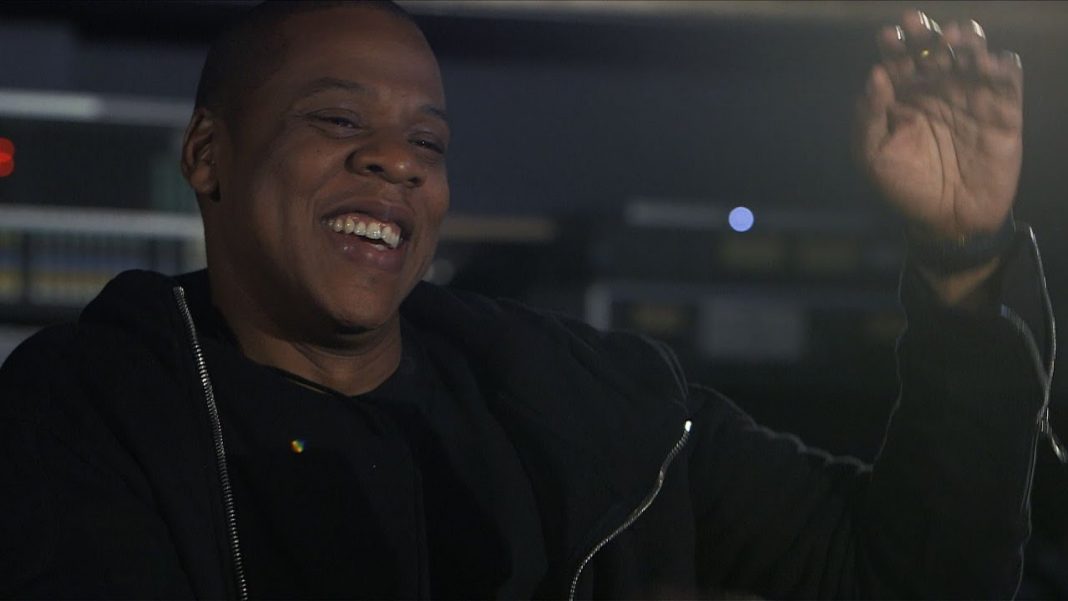 There was an age when a critic would receive an album weeks prior to the release date, and would formulate a final decision after days of multiple thorough listens. But in recent times, Hip Hop reviews have become so rapid, and mundane. Decisions on albums are made within hours of it for the first time, negating all the effort and struggle put into creating the body of work. That is why I have waited to share my thoughts. For days I have listened to Magna Carta… Holy Grail and let each and every song sink into my flesh, before I came to a conclusion.  The iconic Jay-Z has dropped his twelfth studio album; and has many people calling it classic worthy, and many calling it a half interested Hov masked behind exceptional production.  Whatever may be the cause, every fan of music has the right to generate his or her personal opinion for the album, and what it brings for them… Here is my take.

Young Hova’s twelfth studio album kicks off fanatically with this song about the highs and lows, the love and hate, of fame and success.  Behind Timbaland’s luscious piano keys, Justin Timberlake welcomes listeners, captivating them with his dazzling vocal performance, much so, that it is indeed Justin Timberlake that steals the show on the song, with Jay-Z riding shotgun, instead.

Proclaiming himself as the “new Jean Micheal,” Jay integrates some of the finest fine arts (no pun intended) in his art of rhymes and wordplay.  However, it is not HIS finest art. An excess of name dropping painters almost feels like overkill for the listeners in the first two verses.

Timbo and J-Roc bring forth a hard-hitting; base bumping banger, but Jay-Z fails to provide praiseworthy bars as he does nothing but brag about his expensive possessions, and his elite status. The hook is meaningless and his flow is all over the place.  Even with the banging beat, “Tom Ford” seems out of place.

The production again is top-notch as Timbo calls in hit maker Boi1da to co-produce.  The beat is almost tailor made for Rick Ross who in return provides a lackluster verse, rhyming ever bar with “nigga.” Jay-Z delivers with a far superior 16, but by the end of the song, it actually feels like you’re listening to a Ross track.  Whether that’s Ross’ skill (cringe), or Jay’s inability to shine (cringe again), it’s a solid piece.

Of course Frank Ocean is featured on this cut, and what a performance he gives us. The theme of the song itself is breathtaking, as the artists talk about celebrating on a yacht, throwing champagne in the water; the same water that originally brought the Africans there as slaves.  The duality of the water is conceptualized, and at last Jay-Z lays down legendary bars that he’s capable of, referring to the theme of the song through metaphors like Silk and fleeces, lay on my Jesus/ Oh my God, I hope y’all don’t get seasick/ See me in shit you never saw and again, In trouble waters I had to learn how to float, amongst others.  Rapped to perfection, and beautifully sung, Oceans is triumphant.

The beat has a laid back feel but it doesn’t entirely compliment Jigga’s flow. This is the first time on the album thus far that something lacks in Timbo and J.Roc’s production.  The hook is aimed to inspire but is ironically uninspiring as ever with the boss man chanting “fuck up the world”. There are moments on this song, just like every other, where something meaningful is hidden somewhere; and that is when Jay spits bars like America tried to emasculate the greats/ Murder Malcolm, gave Cassius the shakes. Overall, it’s a hit or miss, depending on the listener.

Hit-Boy and Mike Dean lay down a catchy almost “Thrift Shop” esque beat with the sax loop, and the beautiful piano keys in the background shine on their own.  Lyrically, it’s not a colossal Jay-Z by any means, but his flow matches the beat effortlessly, something the previous song lacked. Although the song is short in length, it works; reaching its climax with the 43 year old man shouting out the former Disney Star’s rhythmic gyrating Gluteus Maximus. “Twerk Miley Miley, Twerk.”

Perhaps the most instrumental bangers presented thus far. Incorporating an electro keyboard effect, violins, snarling bass backdrop, and piano chords, 16 year old Wondagurl and Travi$ Scott are responsible for the monstrously dark Crown. It almost feels like a left over Yeezus, and even more so with lines like You in the presence of king, scratch that, you in a presence of a God; and Bitch asked if I was God, fuck I’m supposed to say no? It works; regardless.

Justin Timberlake is featured on the hook once again, and it’s almost as if he can do no wrong.  Timbaland embodies J.T.’s vocals in such a manner for them to sink into and compliment the instrumental with finesse.  The philosophical religious theme of the song is exploited by two splendid Jay-Z verses.

I confess, God in the flesh, Live among the serpents/ Turn arenas into churches/ I’m like Michael, recycle, these are not 16′s/ These are verses from the Bible/ Tell that preacher he’s a preacher, I’m a motherfucking prophet/ smoke a tree of knowledge, drink from a gold chalice, you gotta love it… You do got to love it.

The truth in my verses versus your metaphors about what your net worth is. Jay dismisses other rappers that brag about their wealth in their verses, completely sidestepping the fact that he too is one of them.  A pointless interlude that disrupts the cohesiveness thus far.

Serving as a sequel to the power couple’s collaboration on ’03 Bonnie & Clyde, Part II is a smooth sounding, jazzy feeling love ballad with Jayonce romanticizing one another. The problem that this record holds though is that it feels far more as an R&B track than a hip-hop one. Individually, there’s no problem with that, but its inclusion in Magna Carta is highly questionable.

A thumping Mike Will Made It banger with an old school Jay-Z flow, but the only complaint is that just as the listener is encapsulated by the thunderous sound; it’s taken away from us.

Featuring a star studded lineup, BBC is the strangest cut off the album. One would imagine that collaboration with so much talent involved would be exquisite, but that feeling never really arises. It feels like a soundtrack to a Japanese movie, and listeners are treated to a rare uninspiring Nas verse.  However, the track is not entirely bland; it just leaves a taste of incompleteness in the mouth, kind of how the “Forbidden Fruit” did.

Here, Jay-Z is creating an anthem for his baby girl like many artists have done in the past.  However, unlike songs such as “Daughters,” “Hailie’s Song,” “Like Father, Like Son,” or even The Throne’s own “New Day,” Jay-Z Blue fails to create that emotional connection with listeners. Each of the aforementioned songs have pure sentiment oozing out of them, but it somehow lacks off this cut.  The quotes from film, “Mommy Dearest” are just awkward and feel uncomfortable.  The benefit of the doubt is given to Jay-Z, but this is by far insignificant to Jay’s glorious “Glory.”

And as we approach the conclusion of the song, we are smacked in the face by one of the worst songs by a major artist this year.  From the dreary lackluster beat, to Jay-Z’s lethargic flow and cringe-worthy hook, nothing about this song works. It does nothing more than serve as an almost unanimous “skip/delete” track for listeners.

While I began to get edgy in my seat from the last couple of cuts, I sit back firmly with Nickels which although isn’t entirely spectacular, is definitely a refreshing outro.  Jay is again inspired enough to drop three solid verses with hints of classic Jigga, and the composition has a novel feel to it.

After concluding Magna Carta… Holy Grail, listeners leave with the two essentials that the album offered: impeccable production and excessive braggadocio. I guess if you’re worth half a billion dollars, it makes it okay to flaunt your wardrobe, jewelry, alcohol, and other wealthy belongings and ways of life that 99% of us cannot relate to. But when you’re historically known for your talents and skill, are respected as an idol by both audience and peers alike, and are clearly still capable of creating lyrical gems, it becomes hard to “pardon your hubris.”  MCHG is an album filled with both wonders and blunders. Is it a legendary body of work by a renowned legend? No.  Is it a half-hearted, mediocre effort by a has-been? No. It is a very well polished record with flashes of both. While Jay-Z still has the capacity of marveling audiences through sensational lyrics, the choices he makes and the routes he takes are sometimes questionable; almost as if he’s taking the easy way out. And although he has his moments to shine, it is usually the featured artist that is predominant.  Despite the hits and misses, one thing is for certain; the colossal production is the ultimate sensation and the true earner of admiration.

Most Entertaining Rappers You Need to Follow on TikTok

You need to be following these rappers on TikTok. Trust us. Continue reading…
Read more

'Ye says, "I need all my people with me for us to get free." Continue reading…
Read more

Famous Dex Calls Out Lil Reese, Jokes About Him Getting Jumped

Things are heating up between the two rappers. Continue reading…
Read more

Most Entertaining Rappers You Need to Follow on TikTok

You need to be following these rappers on TikTok. Trust us. Continue reading…
Read more

'Ye says, "I need all my people with me for us to get free." Continue reading…
Read more

Famous Dex Calls Out Lil Reese, Jokes About Him Getting Jumped

Things are heating up between the two rappers. Continue reading…
Read more